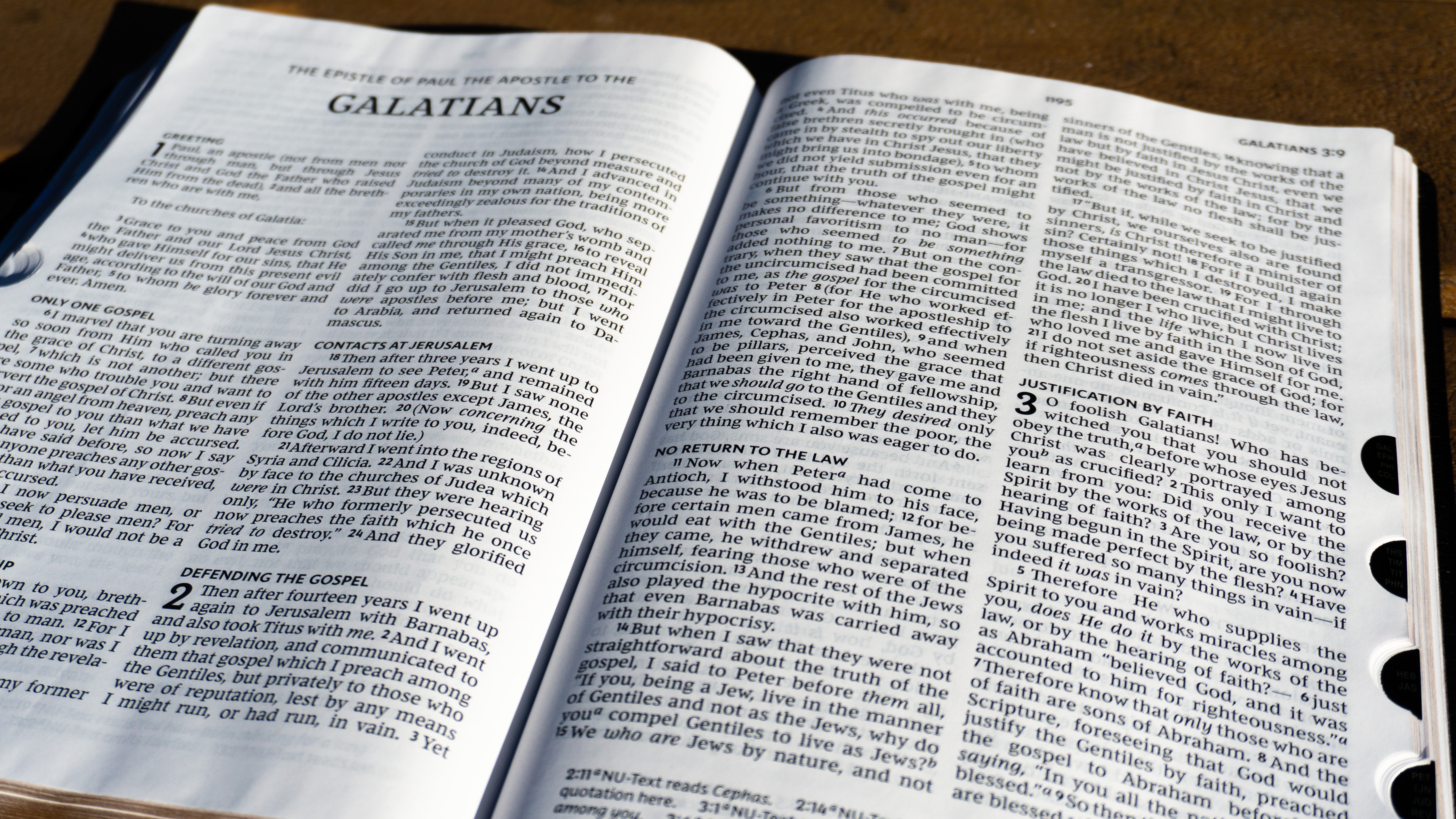 Paul wrote Galatians to address the Judaizing controversy, which was an early Christian Church dispute over whether gentiles still needed to observe some Jewish rituals such as circumcision and dietary laws. Paul argued the teachings, death, and resurrection of Christ made it clear that salvation by grace through faith alone was accessible by all people, both Jew and gentile. Like in Romans, Paul purposed in Galatians to maintain the unity of the church, through union of believers with Jesus Christ, thus promoting the missionary nature of God that Paul and all believers are called to profess.

While Paul writes to unite Jews and gentiles through union with Christ, he is aware of the constant tension found between the law of works which can lead to legalism and the law of grace through faith which can lead to license to sin. Immediately in v. 13, Paul warns not to abuse the freedom found in Christ as an opportunity for the flesh to pursue the sin it desires—this freedom is constrained by love found through life in the Spirit. However, the opposing pull cannot solely be the desire to fulfill the law, which leads to legalism, but rather he counters this tendency with a law of love. Paul summarizes the whole law in v. 14 by quoting Leviticus 19:18, “You shall love your neighbor as yourself,” which Jesus himself highlighted as the second most important commandment in Matthew 22:39, only behind the command to love God above all else. James less explicitly sought a similar aim when he described how authentic faith should result in works of caring for the poor and loving one’s neighbor. Seeking to serve one another in love, which can only be accomplished in the Spirit, stands in direct opposition to Paul’s warning in v. 15 against division caused by judgment, which leads to consuming and devouring one another.

Galatians 5:16-25 provides the key to unifying Paul and James views of faith and works. Paul starts in vv. 16-17 declaring that if someone walks by the Spirit, they will inherently deny gratifying the desires of the flesh because the Spirit and the flesh are naturally opposed to one another. Thus, the key to denying the desires of the flesh, which when followed to their natural end leads to license, or unrestrained sinful living, is pursuing the Spirit of God. However, Paul proceeds in v. 18 to proclaim that those led by the Spirit are not under the law. This is an interesting distinction that rings true with Paul’s description of the law of faith in Romans 3. In both instances, Paul still thinks followers of Christ should conform to certain rules of behavior, much like James more explicitly exhorts believers towards good works—Paul and James both agree that good works are a natural result of Christian living.

If Christians are not under the law, what then are considered behaviors or “works” in line with Christian living? Paul begins to answer this question by describing the contrary works of the flesh in Galatians 5:18-21, which are the natural outcome of antinomianism, an attitude of complete rejection of the law leading to license to sin. In v. 21, Paul warns that these works of the flesh indicate separation from God and “will not inherit the kingdom of God.” Given Paul’s previous emphasis on justification by faith alone in Romans, it is enlightening that he seems to share a point of agreement here with James—works not aligned with the heart of God indicate an inauthentic, or “dead,” faith not leading to justification. On the other hand, in vv. 22-26 Paul describes the fruit of the Spirit, “love, joy, peace, patience, kindness, goodness, faithfulness, gentleness, self-control,” which are the naturally resulting works that come from authentic faith. Those who are led by the Spirit, belonging to Christ, no longer find the passions/desires of the flesh attractive, and they crucify the flesh, letting it die on the cross with Christ, who paid the penalty for all sin past, present, and future. These fruits of the Spirit described by Paul in Galatians fall directly in line with the “works” described by James and support the argument that these “works” are the required evidence of authentic faith, thus showing believers to be righteous, or justified.

Paul’s explanation of Spirit-filled living in Galatians ties together the paradoxical relationship between faith and works. Authentic faith leads to Spirit-filled living, which naturally results in works pleasing to the Lord, while inauthentic faith leads to continuing in the desires of the flesh, resulting in works of the flesh rather than works pleasing to God. Justification comes through faith alone in the work of Christ on the cross, but any authentic faith will be validated by works. Paul argues from God’s birds-eye perspective, that justification comes through faith apart from works such that the gospel is accessible by all people, and God desires the unification of his church. On the other hand, James from the limited human perspective, that justification comes, or can be perceived, through works out of love for God and others, which is the natural fruit of authentic faith.

Paul and James theological arguments are not a matter of either justification by faith or justification by works, which presents a false dichotomy. Both agree that salvation through Christ is a beautiful paradox in which justification comes by the gift of grace through faith, true heart belief, which manifests in works pleasing to God, displaying evidence of sanctification, continually becoming more like Christ. When discussing the tension between belief and obedience Bonhoeffer astutely observed, “so long as we hold both sides of the proposition together they contain nothing inconsistent with right belief, but as soon as one is divorced from the other, it is bound to prove a stumbling-block. ‘Only those who believe obey’ is what we say to that part of a believer’s soul which obeys, and ‘only those who obey believe’ is what we say to that part of the soul of the obedient which believes.”[1] Accordingly, we must hold faith and works together in tension, not reducing the theology of Paul or James to arguments for antinomianism or legalism. We must simultaneously “turn the call to follow Christ all the way up to full volume” and “dare to keep turning up the volume on grace—all the way to full blast.”[2] This is what is called for when we have been made new creations that are in union with Christ and have been freed to walk in obedience through the power of Spirit-filled living.