Union with the Whole Christ 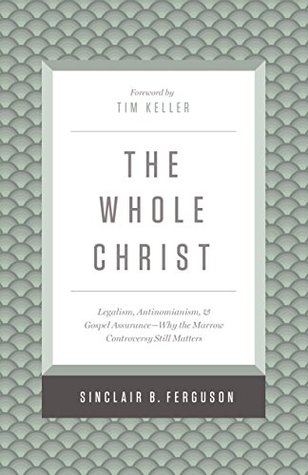 We just completed a twelve-week study of the doctrine of the believer’s union with Christ. The beauty and practicality of this biblical truth has made an indelible impression on my life and, I trust, will grow and flourish in me for the rest of my days.

The idea for this sermon series originated as I planned out the preaching calendar last summer and from a book I read just before I went on sabbatical. Scottish theologian Sinclair Ferguson’s book, The Whole Christ: Legalism, Antinomianism, and Gospel Assurance—Why the Marrow Controversy Still Matters, is not about the doctrine of union with Christ per se; you can see from the subtitle it is about lessons learned from an otherwise obscure controversy in the Scottish reformed churches in the 18th century. But union with Christ takes center stage as the solution to the ever-present controversy surrounding legalism and antinomianism, and in the unceasingly difficult task for so many Christians to find assurance of their salvation.

In the first chapter, Ferguson outlines the historical background of the Marrow Controversy, a debate among Presbyterian ministers about whether or not one should affirm the so-called Auchterarder Creed, which went like this:

I believe that it is not sound and orthodox to teach that we forsake sin in order to our coming to Christ, and instating us in covenant with God.

The “Marrow” controversy gets its name from an even more obscure book called The Marrow of Modern Divinity and how some of these ministers, most notably one named Thomas Boston, found the book helpful in dealing with the controversy over the Creed.

While the Marrow and the contentious creed stay in focus throughout the book, Ferguson is quick to move us out of the historical background and into its contemporary significance (chapters 2-3). What is on the line here is the free (gracious) offer of the gospel and the need to ensure that there are no qualifications that anyone must meet to come to Christ. Grace is free and can never be conditional or it ceases to be grace. But it is far too easy for the unconditional offer of grace to become muddied.

The ever-present troubles of legalism and antinomianism bring these issues into sharper focus.

Chapters 4-6 deal with the trouble of legalism, a trouble which, Ferguson reminds us, “is a much more subtle reality than we tend to assume” (p. 75). Legalism involves “smuggling law into gospel” (p. 76), and it was this subtle danger that led many to affirm the Auchterarder Creed. Nothing, not even forsaking sin, could be set up as a condition to be met prior to coming to Christ. The antidote to legalism is grace. Against legalism we must insist on the unconditional, free offer of Christ to everyone, that God is eager not merely to expose our sin by his law but to forgive it all by his grace.

Those who objected to the Auchterarder Creed feared that such a proposition would mean that one could come to Christ and continue in sin. They feared the equally dangerous trouble of antinomianism: the belief that Christians are not required to keep God’s law, that God’s law has been abolished. Obedience not required. Ferguson deals with this problem in chapters 7-8. He traces different strands of antinomianism, how it is sometimes defended (for example: “We are not “under law but under grace!” Romans 6:14), and how the gospel of grace shreds this argument. “God’s grace in Christ in our union with Christ,” he writes, “is the antidote to both” (legalism and antinomianism, p. 156).

This is a critical point that Ferguson brings out in this book. Legalism and antinomianism share the same root, the root of a separation between God’s law and God’s person. The antidote for each is not a little dose of the other. Both are resolved only by a gospel of grace. But God’s grace is not a substance, a commodity “out there.” It is Christ himself. “God’s grace to us is Christ,” writes Ferguson, and this is key not only to demolishing legalism but also to demolishing antinomianism (p. 134).

Both legalism and antinomianism are incapable of changing the heart like the gospel of grace. “There is only one genuine cure for legalism. It is the same medicine the gospel prescribes for antinomianism: understanding and tasting union with Jesus Christ himself” (p. 157). Both legalism and antinomianism come from the error “of separating the benefits of Christ’s work from the Savior himself” (p. 57). These two things cannot be separated, not in our theology, not in our preaching. Rather, we must preach the whole Christ if we wish to truly preach the gospel.

These issues lead us to one more that Ferguson addresses, another important practical matter: the assurance of salvation (chapters 9-11). Once again, the implications of the believer’s union with Christ comes to the forefront. False assurance for non-believers, and the lack of assurance for true believers, are real biblical possibilities. But since genuine “assurance of salvation is the fruit of faith in Christ” (p. 197), we can only seek to nourish this assurance “on a clear understanding of grace and especially of union with Christ and the justification, adoption, and regeneration that are ours freely in him” (p. 199). Thus what we need in order to have assurance of salvation is not better evidences within us that we belong to Christ. Rather, we need “a better grip of Christ. Then the evidences will grow like fruit” (p. 204).

The last chapter addresses several different factors that can lead to a lack of assurance, each of which call for different “pastoral medicines” from Scripture which can be used to encourage assurance (p. 213). This is some of the best pastoral counsel I’ve ever seen on helping believers who struggle with assurance of salvation. It is a fitting end to an excellent book which demonstrates the importance of union with Christ to the real struggles we experience in our Christian discipleship.

Church Signs, Hamilton Lines, and the Privilege to Ignore

The Essence of the Ten Commandments

The Preamble to the Ten Commandments